Register of medical reports including details of name, age, condition, remarks, weight and dates of illness 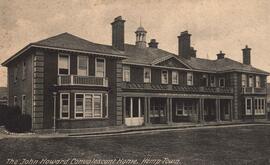 Administrative and financial records relating to John Howard's Convalescent Home, a holiday home for people with complicated physical disabilities established in 1914 by Sir John Howard (c.1830-1917), entrepreneur and railway owner. The home seemed to operate from 1914 to 1947 before being nationalised as part of the new National Health Service. Not much is known about the subsequent twenty years but in 1974 it was taken over by the Royal Hospital for Neuro-disability. The Hospital renovated the premises and the hospital acted as a holiday home and a place for long-term residents. In March 1996, the Hospital closed the Home citing that it had become uneconomical to run and required costly renovation to meet suitable modern standards.

The collection includes admission books, medical reports and accounts for the home dating from 1914-1962.